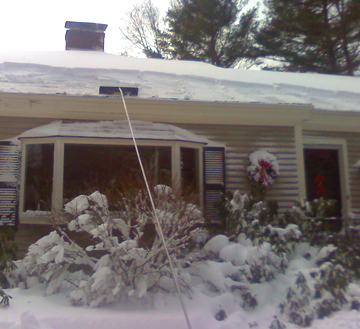 Today we had our first good 12″ snow storm of the season here in Ipswich, Mass. After spending a few hours clearing our long driveway and shoveling the walkway I was tired, but I always make sure to rake the roof as well. For those of you not from this area, roof dams are the build-up of ice along the eaves after heavy snowstorms. Roofers now use a rubber membrane such as Grace Ice and Water Shield (also known as bitchathane) under the first four feet of shingles to prevent ice and water damage instead of traditional black felt paper.

Our 50’s ranch with its low pitched roof is subject to roof dams. The ceilings are well insulated and the attic is ventilated, but in New England, snow storms often bring “warmer” weather, and when the attic temperature rises above 32 degrees the snow in contact with the shingles begins to melt, insulated from the cold by the pack of snow above it.

Streams of water begin to trickle down the roof, only to freeze when they reach the colder eaves, and the ice buildup can become several inches to a foot thick within a day. The formation of icicles is the first sign of a problem. As water builds up behind the dam, it runs under the shingles and drips down into the walls and ceilings, causing serious water damage to drywall, woodwork and flooring.

To prevent this from happening I use a wide “roof rake” with long extension poles to pull away the lower 4′ of snow from the roof. This will usually prevent the buildup of ice at the eave, but occasionally allow a dam will form higher up, necessitating the removal of additional snow. Don’t wait to see if an ice dam forms. It takes only a few minutes to clear the edges of snow, but when you find yourself on a ladder in the cold hacking away at an ice dam with a hammer or ax you’ve waited too late.

Follow-up: It’s the last day of January, 2011, and we’ve received a record five feet of snow since just before Christmas. I have diligently removed the lower 4′ of snow after every storm, and there are just a few small ice dam sections, and no leaks. With a huge one-two snowstorm punch expected beginning tomorrow that could deliver an additional 2′ of snow, I decided to begin removing the two feet of condensed snow that has built up on my roof. As you can see in the picture on the right, I removed so much snow with just my roof fake that I could literally climb on the roof to begin digging out the upper section with a plastic snow shovel. It took two afternoons, but I’m ready. Although the rafters still look straight and sound, this house was built without trusses so that the attics can be used for storage. The danger in this case would be that the weight of the snow on the roof would push the peak down and the rafters away from the walls.

Be proactive– remove the snow before it becomes solid ice or too packed to handle. If you do end up with an ice dam after all, knock a chunk of ice off about ever 10 ft of the roof to allow it to dry, as in the following video:

This site uses Akismet to reduce spam. Learn how your comment data is processed. 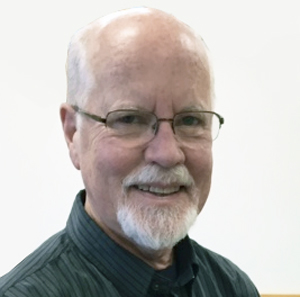 Sorry, my availability is limited at this time due to COVID.

I'm also the Ipswich Town Historian, and research the history of houses for their owners. Contact by email: gordonharris2@gmail.com